Life on the Bubble: An Update on the Virginia Cavaliers' NCAA Tournament Hopes

Share All sharing options for: Life on the Bubble: An Update on the Virginia Cavaliers' NCAA Tournament Hopes

Eight games ago, fellow Streaking the Lawn writer Brian Schwartz and I offered a somewhat pessimistic, two part look at the Hoos chances of receiving a bid to the NCAA Tournament. A season full of Wisconsin highs and Old Dominion lows had just seen a frustrating defeat to Georgia Tech. We pegged the Hoos Tournament chances at around 17%.[1]

One month later, and about ten days away from Selection Sunday, the outlook is decidedly more positive. However, the Hoos' propensity for mixing great, inspired performances with lackluster, disheartening defeats[2] refuses to disappear. The team has two regular season games and the ACC Tournament with which to stake their claim to a bid.

This post provides updated NCAA Tournament scenarios and probabilities with a slight tweak of the previous method. A modification of the RPI confidence levels from the previous posts is followed by the scenario breakdown and overall chances of "Dancing."[3]

You'll recognize this first chart from the previous posts, which details the NCAA/NIT cut line for ACC teams over the past five years. 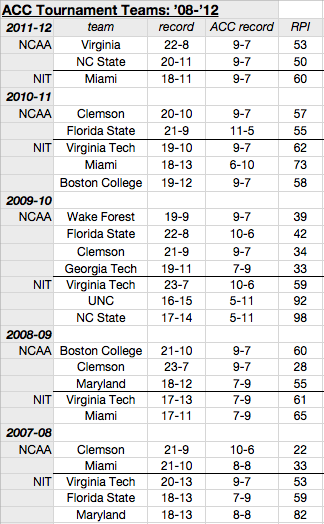 The last analysis leaned heavily on RPI as the determining factor for receiving a bid. This seems quite reasonable in light of this chart, which shows that no ACC team in the past five years with a lower RPI received a bid over a team with a higher RPI. An RPI of 65 seems to be a generous lower bound for receiving any Tournament consideration.

This analysis was accompanied by one major caveat: the Hoos' record and "eye-test" wins could suggest a stress-free Selection Sunday while their accompanying RPI would put them squarely in the NIT. Their mix of big wins and bad losses, both that directly[4] and indirectly[5] hurt their RPI, make for an unprecedented resume.

Since our previous analysis, bracketologists everywhere have repeatedly flexed their predictive muscles, and in doing so, have shed some light on the Hoos' unique situation. The more recent big wins appear to garner more RPI leeway than the above chart would suggest. In the Bracket Matrix, an amalgamation of 91 separate bracketologist predictions, the Hoos are among the NCAA Tournament field in 71 brackets.[6] This crowd-sourced consensus places the Hoos among the "Last Four In"[7] with an RPI of 63.

So an RPI near 65 appears to correspond to a > 50% chance of receiving a bid. The previous RPI confidence ranges need some adjusting. Given that an RPI of 63 for the Hoos appears to largely be in, but still squarely on the apparently unavoidable bubble, I'll use a confidence level for the range of 60-65 roughly matching the percentage of predicted brackets containing the Hoos; an 80% likelihood of receiving a bid. We can expect that a drop of 5 in the RPI would prompt a slip down to a mix of "Last Four In" and "First Four Out" projections. A confidence level of 50% thus seems reasonable for the 66-69 range.

The 70-75 range directly grapples with the difficulties of the Hoos resume. Over nearly 20 years of RPI and NCAA Tournament Selection, two "major conference"[8] teams have made it in with an RPI of 70 or higher: Air Force at 70 in 2004, and New Mexico at 74 in 1999. Those aren't good odds. A 0% likelihood of getting in would be appropriate for most teams. The Hoos, though, have exactly the type of resume that could make them the third team in this range to receive an NCAA bid.[9] Still, even a 50/50 chance would be a stretch, and a likelihood of around 30% seems appropriate[10] for the 71-75 range. The Hoos won't make it in with an RPI of over 75.[11]

Our new confidence ranges combine with the updated predictions from RPI Forecast to detail the scenarios over the remaining games.[12] 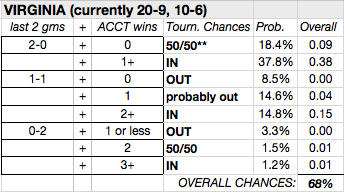 I made one adjustment to the Tournament Chances in the above chart. Per RPI Forecast, a 2-0 regular season finish with a first game ACC Tournament exit would give the Hoos an RPI of 73, squarely in our "probably out" 30% range. This seems off, though. Finishing 2-0 pre-tournament would put their RPI at around 57. RPI Forecast is thus suggesting that losing their only game in the ACCT would drop the Hoos' RPI 16 spots. By comparison, the recent Boston College (RPI of 140) loss dropped the Hoos' RPI five spots from 58 to 63. Even if RPI Forecast were projecting a first game loss to one of the lowest ranked teams in the ACC, Virginia Tech and Clemson both have RPIs around 170, although I hesitate to question mathematical models it's difficult to imagine a drop of more than 10. Such a decrease would instead place the Hoos in the 65-70 range. Consequently, I changed this asterisked scenario to a 50/50 likelihood.

Finishing 2-0 with at least one win in the ACC Tournament is by far the most probable outcome according to RPI Forecast, and would safely lead to a Tournament appearance. The overall chance of 68% is a marked improvement over the previous analysis.[13]

The next game in Tallahassee is absolutely huge for the Hoos. A win in a typically troublesome away game would go a long way toward improving these chances. A loss, while not completely dream-crushing, would decrease the likelihood of an NCAA Tournament bid to around 20%. It's crunch time. Wahoowa.

[1] Although this number is not comparable to the final percentage here; you'll see why

[2] Seriously, though, where was Jontel going? That one still hurts.

[6] as of Wednesday afternoon

[7] according to the Bracket Matrix's twitter feed (@bracketproject), since they don't actually list a "Last Four In" on the site.

[11] If they do, feel free to bring this error up repeatedly.

[12] I stuck with the descriptive likelihoods here. In last year's version of my Tournament prediction post, on my old blog, I used a very scientific, "Big Dance"-themed scale copied here for posterity (and because I really enjoyed writing it):

Probable to Lock: The Safety Dance (Men Without Hats)

This classification indicates that the Hoos will confidently stride into the Tournament. Aside from the obvious title, the lyric "we can dance if we want to" accurately reflects a team on a path to the tourney. Also, I just wanted an excuse to post the really bizarre music video.

On the Bubble: Thriller (MJ)

If at all possible, the Hoos want to avoid the stress and nail-biting and zombies that accompany a Selection Sunday spent on the bubble. Just ask our agriculturally-minded friends brethren fellow Virginians down in Blacksburg. While this sort of thrill is generally not desirable, much like watching a lot of well-choreographed dancing zombies, it's a lot better than knowing you'll miss the Tournament.

After achieving so much this season, the Hoos would certainly hope to avoid (electrically?) sliding down to one of the lesser tournaments. A trip to the NIT would stick with Hoos fans much like the haunting memories of the number of times you've danced to this song against your will.

[13] Although, since the RPI ranges were much more strict before, it has probably only increased by about 15-20%.