A Different Type of Fadeaway: Season-Long Fatigue and Three-Point Shooting

This article, written for the Stat Geek Idol competition, explores the effects of fatigue factors on three-point shooting. (The competition prompted the lack of "Hoos" and overall slightly more formal tone)

Share All sharing options for: A Different Type of Fadeaway: Season-Long Fatigue and Three-Point Shooting

Just before the 2012-13 season turned to the homestretch of March, the Virginia Cavaliers "arrived" one year ahead of schedule with an emphatic wire-to-wire victory over the Duke Blue Devils. Burgeoning star Joe Harris entered the national consciousness with an Offensive Rating of 149.9 while using 37.5% of his possessions on the floor.[1] Most Virginia fans felt he began receiving just recognition for the role he had filled all year: a steady, coldly efficient leader on a team otherwise capable of inexplicably uneven performances. The Harris-guided bubble team appeared to have written the final line on its postseason resume. Instead, the Cavaliers missed the NCAA tournament by stumbling to a 1-3 finish.[2]

It wasn't coach Tony Bennett's famed Pack-Line that crumbled; the team's offense averaged 0.91 points per possession in the concluding stretch,[3] as compared to a season-long average of 1.05. The normally dependable Harris struggled with his outside shot. He failed to shoot over 37% in each of the last four games, after only failing to crack that mark twice previously in ACC play, while his once league-leading three-point shooting stood at a paltry 26.9%.[4] For Harris, a player who takes 23% of his shots at the rim and 45% three-pointers,[5] this outside shooting slump was ill-timed.

Both professional writers and amateur Twitterers inevitably offered explanations for Harris' decline. Harris and the team dispelled the presence of a lingering injury. The oft-cited "nerves" curiously weren't a problem during the Duke game, when the team was in worse bubble shape. Finally, a fatigue rationale seemed to merely be a derivative of the classic "burdened hero" sports article narrative, wherein the weight of the team simply became too much for Harris to bear. But following continued subpar performances in the NIT, Bennett suggested that Harris "carried a big load all year, and I think he looked worn down at the end." The fatigue concept piqued my interest. Maybe there was more to his exhaustion. Does season-long fatigue have a measurable effect on outside shooting, and three-point shooting in particular?

This article grapples with this question by attempting to discern whether (1) season-long fatigue affects three-point shooters, and (2) if so, the magnitude of it's impact, and factors that influence the magnitude. Can Harris and other three-point experts blame the regular season grind for untimely performance dips?

I traced changes in three-point percentage ("3P%") for the top 50 players in three-point attempts. Separating each player's season into roughly four-game segments[6] smoothed out some shooting percentage variation caused by game-to-game attempt swings. The top 50, though, rarely missed an opportunity to fire away, and thus also gave good samples both for the four-game segments and overall season. Fitting a curve to 3P% data from all of these segments gave a sense of the shared change.

The top 50 played on teams ranging from Tournament-caliber to ... Grambling. The massive variations in team skill and difficulty of opposition should cancel out any concerns that the traced 3P% change is a product of, for example, the shift to a difficult conference schedule. Furthermore, not every team had something to play for late in the season, offsetting the effects of any crunch time nerves. The large and diverse team sample should leave a relatively pure sense of the three-point shooter's personal battle with season-long fatigue. 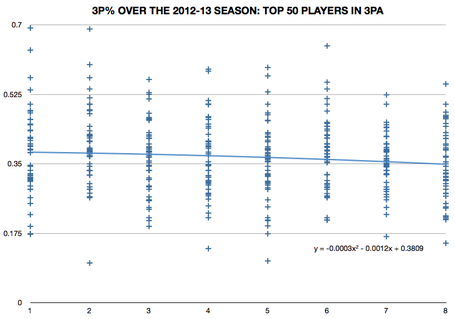 Maybe the timeless narrative wasn't such a tall tale. The graph shows a steady decline over the course of the season. Wear and tear appears to cost high-volume three-point shooters an average of 3% in lost accuracy by the concluding four-game stretch. Three percent is not a large figure. Although they might like to divert responsibility, these shooters would struggle to prove that a substantial season-ending dropoff is wholly attributable to fatigue. Fatigue does appear to influence three-point shooting, though, and might have a different effect on different players. In other words, how do variations in fatigue-inducing factors affect the noted decrease in 3P%?

Certain elements of college basketball are widely accepted as more physically taxing than others. In-keeping with our aforementioned narrative, many observers note the offensive responsibility of a player as a potentially tiring factor. Players are also lauded for active defense, and earn the "tireless defender" tag by repeatedly chasing prolific shooters through a maze of screens or spending significant time jostling for space. I condensed the previous shooting percentage data for each player into four quarters of the season,[7] and traced shooting variations based on statistics representing offensive responsibility and defensive intensity.

I used total shot attempts to represent an individual player's offensive responsibility. This approach should reveal whether, for example, someone who took 250 three-pointers and 50 two-pointers had less of a percentage decline than someone who also took 250 threes, but was further burdened with 200 twos. 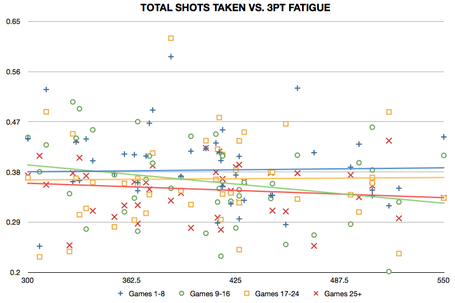 At the lower end of attempts, the gap between the blue beginning of the season and the red end of the season is not very large; about a 2% drop. The gap is certainly wider for higher volume shooters, closer to 5% at 550 attempts. In general, though, it's hard to know what to make of this graph. Shooting percentages in the first 8 games and the third 8 games are basically unchanged in relation to shot volume. The green line for the second 8 games also doesn't quite make sense chronologically. The graph does hint that higher volume shooters experience a slightly worse fatigue decline, but this set of data can't really prove anything absolute.

I used team Ken Pom defensive rank to reflect a player's defensive effort. In theory, players on better defenses expend more energy on the defensive end, and therefore should tire at a more extreme rate. There are some potential problems with this defensive effort proxy. First, although many coaches swear that defense is all about effort, just because a team is bad at defense doesn't necessarily mean that they're not working hard.[8] Second, a hard-working team defense doesn't always mean that the three-point shooter is the one expending energy. Nonetheless, on average, defense is a team effort, and better team defense means more effort from each player. 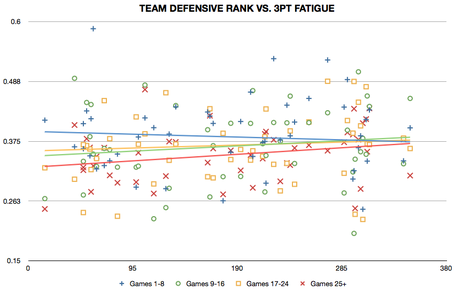 As the team defense improves, the shooting percentage decline between the first 8 games and the last 8 games dramatically increases. Near a rank of 10, it drops about 7%, more than double the average decline. Near a defensive rank of 300, the 3P% decline is almost non-existent. The second and third 8 game trends fit between those for the beginning and end of the season. Team defensive quality appears to be a significant factor in three-point shooting fatigue.

Following a season-ending NIT loss to Iowa, Joe Harris noted: "it's a long year, and the way that we play and the minutes[9] that some of us are playing, it has a tendency maybe to wear on you." For Harris in particular, even playing on the physically demanding Pack-Line seems unlikely to be the sole factor contributing to his late 15% drop in three-point accuracy.[10] Nonetheless, the analysis generally suggests that tangible fatigue effects exist, and become more noticeable when the team works hard on the defensive end. So to all the high volume three-point shooters: keep tossing up those threes, and hope your team chooses a defensive philosophy more closely resembling Grinnell[11] than Virginia.

[2] including the ACC Tournament loss to NC State

[4] disclaimer to fellow Virginia fans: I'm not suggesting this was all Harris' fault, but am merely illustrating the foundation of this article ... please don't shun me

[5] as compared to 34% for the team (from hoop-math.com). Just don't suggest that Harris is exclusively "catch and shoot," or, like Len Elmore, you'll incur the wrath of the Virginia faithful.

[6] in the first graph below, 1-7 on the x-axis are each spans of four games, while 8 encompasses the remaining games in the season, which was usually also around four.

[7] to allow for an easier viewing experience; eight lines would have been messy, and I sought broad, overall changes as opposed to crowded incremental differences

[9] I contemplated graphing minutes, but there would be little variation among the high volume shooters, so shot attempts and D rank are likely more interesting.

[11] their strategy: http://www.coachesclipboard.net/GrinnellOffense.html (my favorite part: "Would you want to use this for you high-school team? Um ... probably not")