In today's recruiting notes, we tell you about two players who list UVa as their top school, break down the fallout from Chris Nelson's decommitment, and reveal the timetable for Jeremiah Clarke's decision. Plus, we unveil our recruiting "Big Board"

Chris Nelson committed to Virginia back on August 25th of last year, and made it only a little over seven months before going back on that decision. Nelson decided to open things back up yesterday, and apparently UVa is still under consideration for the defensive tackle. As we said yesterday, Nelson jumping ship is nothing to freak out about. No doubt Nelson is a talented prospect, but UVa is in great shape for the nation's top two defensive tackles, a fact that was surely used against the Cavaliers on the recruiting trail by Nelson's other suitors. Plus with Donta Wilkins and Tyrell Chavis coming into the program this fall, a position of need will soon become a position of strength. Honestly, if Brown and Nnadi commit to Virginia, Nelson would've probably been the odd man out anyway, and would've had to really improve to beat out the two Tidewater stars. Even though Virginia is still under consideration, I don't think Nelson will try to re-commit. In the end, he'll probably end up either closer to home, perhaps at USF or Miami, or at the school that is his perceived leader at the moment, Louisville.

Clarke Closing in on Decision

Alexandria native Jeremiah Clarke will make his college choice by the end of May, according to the standout defensive end. Clarke, a consensus 3-star prospect, has really picked up steam of late, earning a number of offers. The main contenders for Clarke at this point are Virginia, UNC, Penn State, Wake Forest and Virginia Tech, who has not offered. Clarke has been to Charlottesville several times, most recently for the Hoos' Spring Game. Clarke also showed well at the Rivals Camp Series in Richmond over the weekend, which featured a ton of top-end defensive line talent. The Cavaliers are in a good place in Clarke's recruitment, and have to feel pretty good about Clarke making an early decision.

This week, two 2014 prospects said that Virginia was their top school heading into the summer. Defensive End J.J. Jackson, who has a UVa offer, and quarterback Andrew Ford, who doesn't, both say they favor the Hoos. Jackson got his offer from Virginia on a recent visit, and Ford, although coming to Charlottesville a couple times, hasn't gotten one yet. It's not that the Pennsylvania signal-caller isn't talented, but rather that Virginia has a logjam at quarterback. Ford, a lefty, could still earn an offer if he can convince Steve Fairchild that he is the real deal. We'll see where it goes from here with Ford. But as for Jackson, UVa would certainly take a commitment if he offers one. He has burst on the scene of late, and UVa might have found a diamond in the rough early. The Purcellville, Virginia native could be in the fold for the Hoos soon.

For your convenience, we have assembled a Big Board for all of Virginia's 2014 football targets. Not every prospect that has a UVa offer is on this chart, but every one that the Cavaliers are heavily pursuing is. We will update the board every week or so, and post it on the site. The board is broken down into two charts, one for offense and one for defense. "Athletes" are listed on both charts, as they could play positions on either side of the ball. The "Standing" category shows what Virginia's current position is for the prospect. "Contender" means that Virginia is in play, but isn't listed as a favorite, or the prospect hasn't listed favorites. "Non-Contender" means that the prospect listed favorites and the Hoos are not among them, or they just seem out of the picture, but down the line, they could get back in the mix. The rest of them should be self explanatory. Enjoy! (Click them to enlarge) 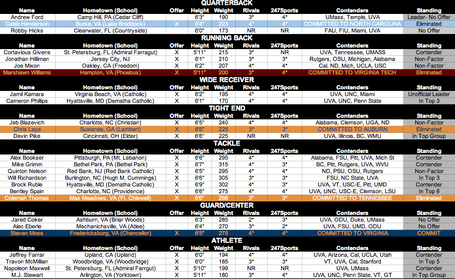 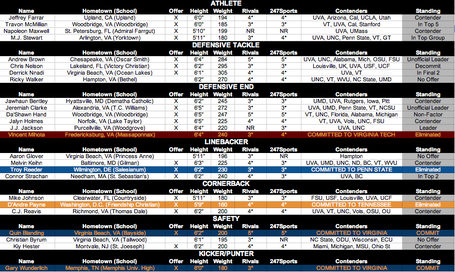