In the first part of our analysis of the ACC's performance in the Directors Cup, we take a look specifically at Virginia's performance over the past ten years.

A little more than ten years ago, shortly after being named Virginia's Athletics Director, Craig Littlepage announced an incredibly ambitious set of goals for the athletics department in Charlottesville over the following ten years. To quote from his bio on VirginiaSports.com:

[G]raduate 100 percent of its student-athletes; win 12 national championships and 70 conference titles; fully endow all scholarships and provide the operational support required to meet all other stated goals; build and maintain high-quality facilities; annually recruit the best student-athletes in the country (based on how coaches rate their top prospects); and fully comply with Title IX.

The Cavaliers didn't reach some of the numeric milestones that Littlepage targeted, but it is hard to argue that the last ten years have been anything but successful (that is, unless you only care about football. In which case, why are you reading this article?).

But enough with the abstract forms of success. Let's take a look at some numbers and charts. 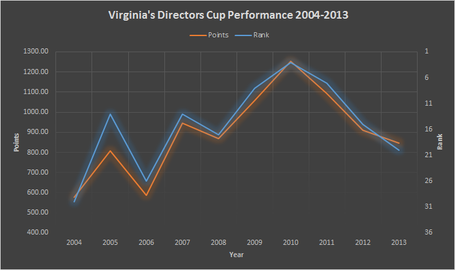 The 2009-2010 school year has to be one that Littlepage looks at and smiles. The Cavaliers won two NCAA National Championships that year (need I remind everyone that this is two more than our backwards cousins in Blacksburg have won in their entire history?) and had three more teams that finished in the top five nationally.

That season was the high water mark in the ten year run, but it wasn't the only successful year. The men's lacrosse team won national titles in 2006 and 2011. The women's team brought home a title in 2004. The baseball team made the College World Series in 2009 and 2011. In fact, it is interesting to note that the Cavaliers won more NCAA National Championships during the ten year period we are looking at than nine of the sixteen ACC schools won in their entire histories.

But it hasn't all been good, either. The downward trend since 2010 has to be concerning to anyone looking at these numbers. While some programs have continued to excel (women's rowing won another title in 2012; men's tennis won the ACC's first ever national championship this year), others have fallen off a bit.

Everyone knows that Virginia's spring sports carry the flag for the athletics program. But just how true that is can be fairly striking when you look at it in graphical form: 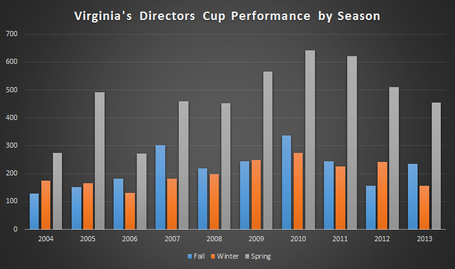 On average, the spring season dominates as you'd expect, garnering more than half of our points: 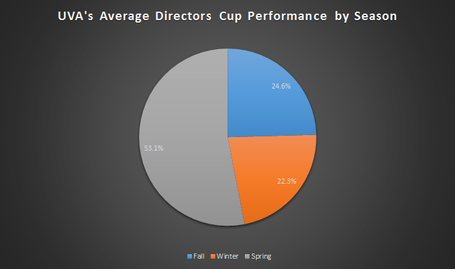 It has to be noted that the Cavalier men's tennis team hasn't lost an ACC match since April 2006.That covers seven complete seasons of the ten seasons we are analyzing. In fact, in the three seasons before that loss (2004-2006), the Cavaliers went 34-4 against ACC opponents and won two ACC titles. While they didn't win their first national title, the men's tennis program probably only has the swimming & diving program to fight with when it comes to the most dominant programs relative to their ACC peers.

Speaking of the swimming & diving program, their dominance of the ACC continued under the guidance of recently departed head coach Mark Bernardino. In ten years, the men's team won nine ACC championships and the women's team won seven.

The Cavalier's overall athletic performance over the last ten years has been impressive. Coming anywhere near Stanford, as Virginia did in 2010, is an accomplishment in and of itself. We just need to hope the downward trend is a temporary thing.