Part three in a series of posts looking at the performance of ACC teams in the Directors Cup. Everyone knows Stanford has ruled the roost, but how has the ACC fared? To start, we'll look at the pre-expansion teams in the ACC.

Last week we took a look at Virginia's performance in the Directors Cup over the last ten years. Today, we wanted to show you how the "old guard" of the ACC fared during the same time frame. By "old guard" we're referring to the seven remaining original teams - Clemson, Duke, Maryland, North Carolina, North Carolina State, Virginia and Wake Forest - plus the addition from the first ACC expansion (Georgia Tech in 1979) and the second (Florida State in 1991). South Carolina was an original member but they jumped ship to become an independent (they'd later join the Metro conference and finally, of course, the SEC).

We'll look at these teams first to form a baseline for how the ACC should perform. Then on Wednesday we can take a look at the three teams that joined in the third ACC expansion (Boston College, Miami and VPI&SU). Next week we'll look at the newest additions - Louisville, Notre Dame, Pittsburgh and Syracuse.

So let's take a look at a chart of the performance of all nine of the "old guard" teams: 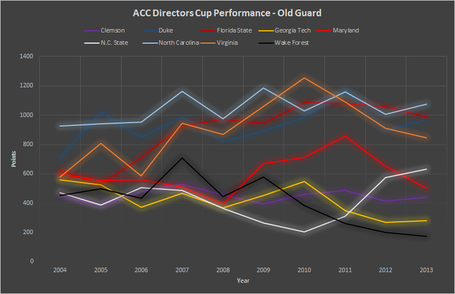 Admittedly, with nine teams on the chart its a little hard to tell much from the data (but make sure to click it for a larger version). But there are a few things you can tell:

I find that last point particularly intriguing. Maybe someone from the Florida State community can reach out and talk to us about what has happened with their athletics program that caused a rise in performance like ours.

Now, as I said, that chart is a little hard to read with all the data. So let's look at it a different way: 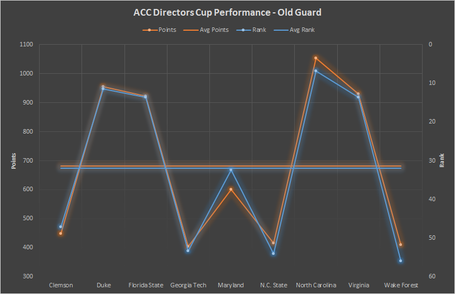 There are a lot of things that stand out in this chart:

So now we have a baseline to which we can compare the new teams that have been added since in the last two expansions. We'll start that on Wednesday.