The fourth part in a series exploring the performance of the Atlantic Coast Conference in the Directors Cup. Today we take a look at the first raid of the Big East by the ACC and what those three schools - Boston College, Miami and Virginia Tech have brought to the table over the last ten years.

Back in 2004, before conference expansion became all the rage, the Atlantic Coast conference raided the Big East, taking Boston College, Miami and - with the unfortunate interference of then-Virginia Governor Mark Warner - Virginia Tech. Getting to 12 teams was an important move for the ACC and they got the added benefit of having Miami and Florida State in opposite divisions and playing in the conference football championship every year (oh, wait).

So these teams were good in football (er... well... sort of), but how did they impact the ACC's overall athletics profile? To get started, let's take a look at what those three teams did over the last ten years: 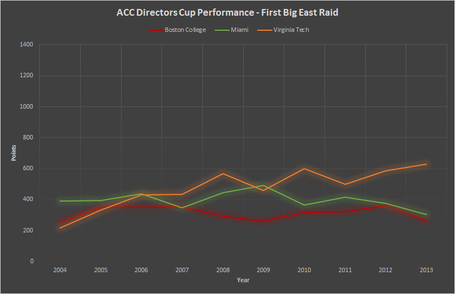 So what can we tell here... The three teams have been fairly consistent over the decade. Governor Warner would be happy to see that Virginia Tech has made some progress, moving from the worst of the three to the best of the three (by a decent margin). Otherwise, fairly unremarkable.

You may notice, however, that there's a lot of room at the top of the chart. That's because I kept the axis formatted the same way from the chart this past Monday. In other words, they're on the bottom end of the chart as far as ACC schools go.

For a better comparison with the Old Guard, take a look at the averages of all twelve teams: 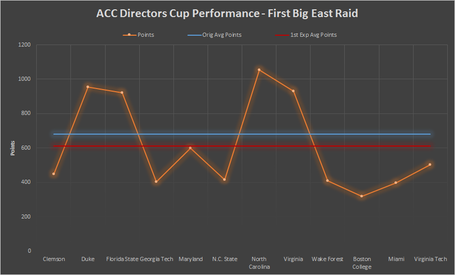 Some points about this chart:

So what do we see here? The expansion clearly introduced three below-average athletic departments into the conference. In fact, Boston College brings up the rear, while Miami falls in line with the previous three worst schools from the Old Guard. Virginia Tech looks pretty darn good compared to their Big East brethren, trying (and failing) to give Maryland a run for its money as far as middle-of-the-road athletics departments go.

Speaking of Maryland, they must have been pretty happy with the addition of those three teams. It brought the average of the ACC programs down to their level.

With that, what can we say about the first Big East raid? We can definitely say that, as far as the Directors Cup is concerned, the expansion did nothing to bolster the conference's overall athletics profile. But really, anyone who watched the consecutive Boston College - Virginia Tech football championships could already tell you that.

Next week we'll take a look at the second Big East raid - the addition of Louisville, Notre Dame, Pittsburgh and Syracuse. We can't look into the future to tell how they will perform in the ACC, but we can look at the same ten year span we've been looking at for the past couple of weeks. Until next time - Wahoowa!