In part 5 of our ACC Directors Cup analysis, we take a look at the four(ish) newest members of the ACC and how they've performed over the last ten years. We'll see how that compares with the other three the ACC stole from the ACC and with the Old Guard of the conference.

Last Wednesday, we took a look at the first three teams that the ACC poached from the Big East - Boston College, Miami and Virginia Tech. While there was a little bit of disagreement (take a look at the comment by AnthonyAfterwit), we showed pretty conclusively that these three teams added nothing to the overall athletics profile of the ACC and, if anything, they actually had a negative impact.

Today, we'll look at the four newest teams to leave our poor geographic conference brethren for greener (and more stable) pastures - Louisville, Notre Dame (ish), Pittsburgh and Syracuse. Do they perform better than their former conference mates? Or is it more of the same, with the schools being targeted for specific reasons (namely football and basketball) at the expense of the overall profile? Let's dive in! 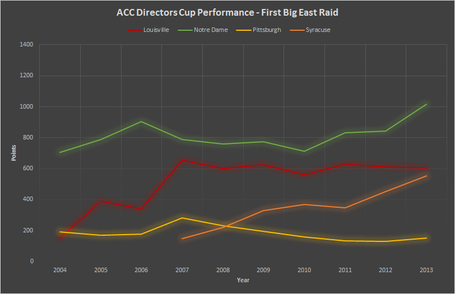 I kept the same range on the Y axis as last Wednesday's chart. While the three teams in that chart were fairly constrained into a small range, these four teams are a little more spread out. Here's what I notice about this:

So now lets see how these new four compare with the previous three additions: 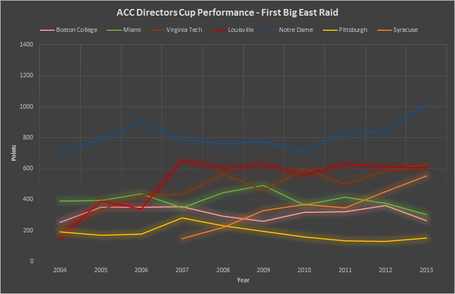 This is admittedly a little jumbled. But there are still some items that stand out here:

I thought that the final chart last week was the most telling. That was the chart that showed the averages of each of the teams over the last ten years. Here's the new version of that one: 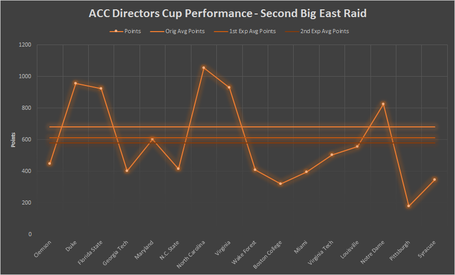 Let's see what we have from this chart:

Let's take a look at this data another way. Here's the actual raw numbers for the team averages: 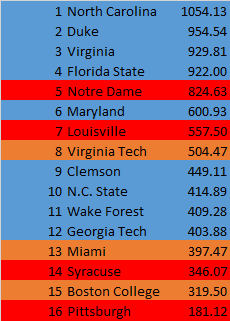 Much like the first Big East raid, these additions are underwhelming. Notre Dame makes this expansion look better than the last one... but Pittsburgh and Syracuse really drag them down. Certainly the Irish are a quality addition and taken by themselves would be close to a homerun addition. Their national profile is definitely helpful - everyone knows Notre Dame and has an opinion about them.

Louisville may yet turn out to be a solid addition. The amount of money they've put into their athletics programs recently has been impressive. They're certainly committed, much like I would say Virginia Tech is committed. The Cardinals have had more overall success lately than the Hokies (NCAA national title in basketball, College World Series appearance in baseball, etc). But its hard to know for sure if they'll maintain that momentum.

If the Cardinals do continue their momentum, this expansion may look a little better. Time will tell.