We've looked at what the new teams in the ACC bring to the table as far as the Directors Cup is concerned, so now lets take a quick glance at the Capital One Cup to see if there are any differences.

After spending the last couple of weeks looking at the ACC's Directors Cup performance, we wanted to go down a slightly different route today by looking at the Capital One Cup.

Now, if you're an all-sports junky like I am, you probably look at the Capital One Cup as the bastard love child of ESPN and a Virginia Tech fan. It gives a lot of points for good finishes in certain sports (Group B), and a good chunk fewer for finishes in other sports (Group A). The Directors Cup, by comparison, gives 100 points to the national champion in every sport.

Its unclear how the folks at the Capital One Cup decide which sports fall into each of the two groups. That would be part of the problem I have with it. But putting that aside, let's take a look at the groupings and the way the scoring is done:

Right, so the two Track and Fields are separate.Tennis, which basically every school has, is relegated to Group A with the likes of skiing and rifle. But I digress. The scoring structure is like this:

So according to this, a school that finishes 4th in Lacrosse deserves more points than the team that wins the NCAA National Championship in Tennis. I'm certainly more of a lacrosse fan than, say, Will. But even I find that ridiculous.

Sorry, I keep going back to that.

Also keep in mind that the Capital One Cup has only been around for three years. So we don't have a full decade of data to look at like we did for the Directors Cup.

So how do all the ACC teams do? Let's take a look. Here's the men: 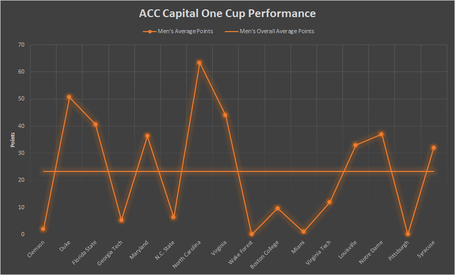 And here's the women: 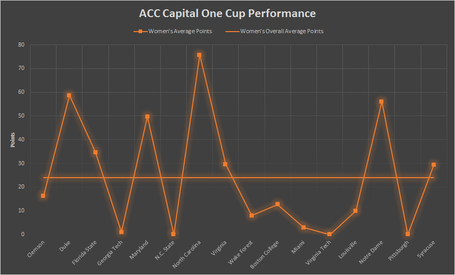 So what do we see?

A few things that you can't tell from the charts:

Pittsburgh must hate the Capital One Cup as much as I do.

While the best programs are from the Old Guard, some of the worst are as well. So based on the Capital One Cup results, its hard to criticize the new teams that much. Syracuse moving "above the line" in the Capital One Cup helps the new guys to have three teams "above the line" for the men and two for the women. That compares to five each for the old guard - which admittedly has more programs to choose from.