ACC CHAMPS, BABY! WHAT ELSE IS THERE TO SAY!

Share All sharing options for: Monday Motivation: CHAMPS IN C'VILLE!!

Let me defer to the great poet T-Pain for a second.

Well, since the calendar turned to 2014, that's basically been the motto of Coach Bennett and the Virginia men's basketball team.

The squad continued their magical, historic run this weekend as they ran through the ACC Tournament, defeating Florida State, Pittsburgh, and Duke to push their record to 28-6.

With the win over Duke, Virginia managed to clinch the ACC title for the first time since 1976. For those who aren't great with the maths, that's 38 years. In what was one of the most incredible and epic weekends of Virginia basketball (or even athletics overall), the Hoos emerged victorious and can now call themselves ACC Champions. 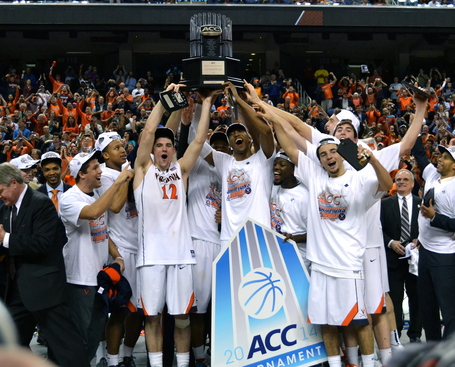 It never gets old.

The three-day tournament for the Hoos acted as a microcosm of Virginia's season as a whole, combining blow-outs (13 point win over FSU) with rock-fights (nail biter with Pitt), and throwing in a masterpiece of a game against Duke to cap it all off.

Each game showcased a different contributor for Virginia, as well, which has become a calling card for the Cavaliers.

Joe Harris (#swoon) shook off the funk he had been in leading up to the tourney and finished the weekend with 47 points, eight rebounds, and four assists. His performance was impressive enough to earn him Tournament MVP honors, and in true Joey Hoops style, he almost seemed too humble to accept it.

Uncle Malcolm "Hollywood" Brogdon had a rough couple of games (by his standards) leading up to the finals with 16 points, 12 rebounds, and six assists combined against Florida State and Pittsburgh. While he had looked out of sorts initially, he exorcised the demons before facing Duke and finished with 23 points and played like a man with purpose. Brogdon accompanied Joe on the first-team All-Tournament.

Akil Mitchell is a defensive genius. He played three stellar games against tough draws, and came out on top each time. Mitchell gave Jabari Parker what for all game, and finished with seven points, 15 rebounds, one steal, and two blocks against the Blue Devils. (Quick aside: SUPER impressed with Parker. He's an unbelievable player and a classy kid. I wish him the best in everything he does.) Now back to Akil, who deservedly got a spot on the second-team All-Tournament.

Next, is Anthony Gill. Ohhhhh Anthony Gill. The Gill-A-Monster. Talk about coming alive at the right time of the season. AG was a 'defensive liability' early in the season, but has stepped up in ways no Wahoo fan could imagine. In the tournament, he continued his beast of a game from Maryland and rattled of three straight praise-worthy performances. Finishing with 38 points and 17 rebounds is outstanding production from any player, and when you add in that he's coming off the bench...whoa. Look out. Anthony has been so aggressive and much improved from the free throw line (minus some snags on Sunday, but whatever), making him such a threat down low. Gill also made second-team All-Tournament (though I think he had a great claim at first team). 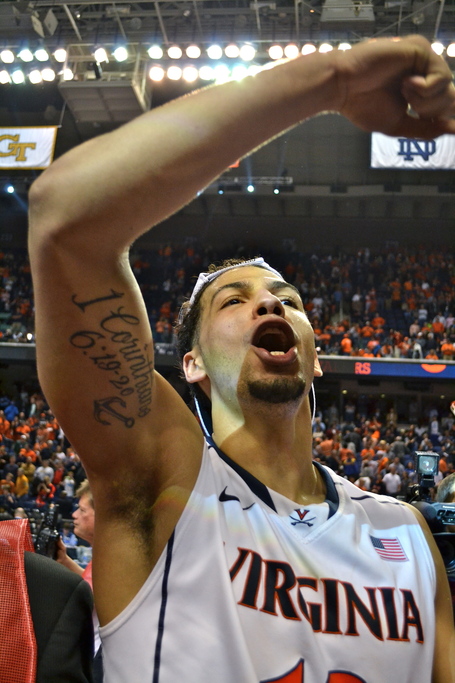 One of my favorite moments (of thousands) from Sunday was immediately following the technical foul assessed to Coach K. The guys looked for someone to take the free throws (since the foul was given to the bench, not committed by a player on another player), and fourth year Joe Harris looked at first year London Perrantes and said, "Do you want me to take them?"

London then shook his head casually (#CaliSwag), and tapped twice on his chest, saying, "I got this."

He certainly did. Without hesitation, Perrantes stepped up to the line, and drained both like it was nothing.

This truly is a team, and it is beautiful to watch.

As the seconds ticked away and Malcolm went to the free throw line to ice the game, the guys stood at midcourt with grins that stretched from Greensboro to Charlottesville. For a team that rarely exudes that obvious a display of happiness during a game, it was an amazing sight to see.

The Virginia fans were incredible all weekend, and they were rewarded hand over hand for their dedication to this program over the last 38 years as they got to watch each player climb the steps and take a piece of the net. When Coach Bennet climbed to remove the final portion, you would have thought you were in John Paul Jones Arena. 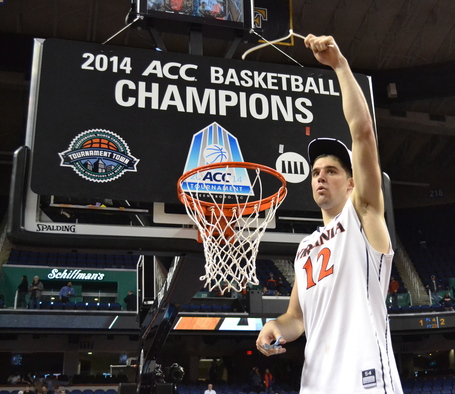 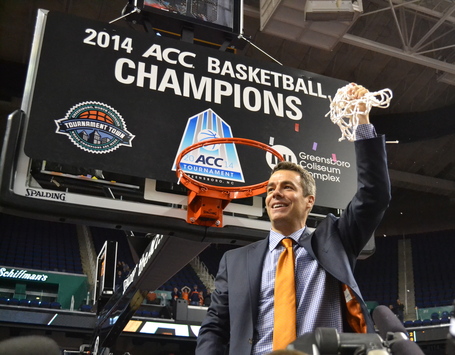 After the confetti had fallen, the hats and tees doled out, and the net cut, the day still wasn't over for the victors. Thanks to the 863rd impending snow storm of this winter, Virginia had to cancel their original Selection Sunday plans and hit the road back to Charlottesville.

Instead of doing the show at their hotel with media at the ready for their reactions, the Hoos headed to Danville to grab food and find out their seed. Take a look for yourself:

WARNING: COULD INDUCE GIDDINESS OR TEARS OF JOY

Not only are the Hoos the ACC regular season victors AND the ACC Tournament winners, they now have the honor of being the one seed in the East Region, which starts them in Raleigh Friday night and could send them through New York if all goes well.

HOOS NUMBER ONE, Y'ALL.

Impressively, the Hoo Crew organized a meeting of the team bus at JPJ when the Cavaliers arrived back in town, fighting the falling snow and slick roads to show their team how much this victory means to the entire Wahoo Nation.

@JusAnderson1 coming out to greet us in the snow with no jacket and calling us crazy! pic.twitter.com/c0T199t7K0

Virginia's faithful followers were enthusiastically showing their support today, ranging from speechless to all caps rants.

good day to be a HOO

Speechless. Tweetless. Gimme a while.

Duke may not stand a chance! Too much discipline!

What an unbelievably amazing day, weekend, and season for this team. It has been an absolute privilege to cover this group of players and coaches over the past few months, and on behalf of the Virginia fans,

Don't stop now, Hoos. Take that number one seed all the way to Arlington, TX. We are here cheering you on.