Virginia won the ACC regular season crown, then the ACC Championship, and snagged a No.1 seed in the East Region. So why does no one seem to notice?

If you buy something from an SB Nation link, Vox Media may earn a commission. See our ethics statement.

Share All sharing options for: 2014 NCAA Tournament: Hey, Remember Us?

It has been an amazing week for Wahoo fans and the University of Virginia men's basketball team. If you have spent any time on our site since last Sunday, you know that Virginia handled Duke in the ACC Championship and subsequently earned a No. 1 seed in the NCAA Tournament, playing in the East region.

Virginia was seeded opposite the Coastal Carolina Chanticleers (what up, Chaucer?), who earned a spot in the tournament by winning the Big South tournament.

After a season that saw losses to VCU (last second shot), Wisconsin (ugliest game...EVER), Wisconsin Green Bay (no, seriously, not a bad loss), and THE 35 point blowout to Tennessee (thanks, Vols, we owe you big time!), I can see why people were hesitant to expect big things out of the Cavaliers. Hell, even our own fans were questioning how good this team could be.

Once the calendar switched to 2014, however, a brand new team took the court in Virginia's uniforms. The Hoos rattled off three huge wins over FSU (12 points), Wake Forest (23 points), and NC State (31 points) before stumbling at Duke on The Shot That Haunts My Dreams.

Obviously, three games were not enough to convince our critics, and we heard about it.

"The fact that the Cavs are even a measuring stick [for Duke] should be a red flag. This is the same Virginia team that lost by 35 at Tennessee." -C.L. Brown, ESPN

Fair enough. From that point, Virginia shifted into another dimension, winning 13 straight before dropping their last regular season game to some team north of us. At the end of the day, the Hoos had a 16-2 ACC record, and sat two games ahead of Syracuse.

Virginia was the only 'elite' ACC team (Duke, Syracuse, and UNC) that did not drop a game to a team in the bottom six of the conference, and were clicking on all cylinders.

That should equal some respect, right?

That wasn't necessarily the case after selection Sunday. A newly healthy Michigan State dominated the conversation regarding the East, and that's understandable. The Spartans are a tough, EXTREMELY well coached team, and have a plethora of players who can put up points (41 for Adreian Payne in their First Second Round win over Delaware).

It started to look like the major sports media had even forgotten Virginia existed, or at least hadn't bothered to stat check their information.

First, was this gem from ESPN:

Ah. So here's why we are getting no respect. Apparently we went 23-9. pic.twitter.com/A8ZLtkQnIg

Then came some bold picks from 'the experts':

And the subtle and...not so subtle hints: 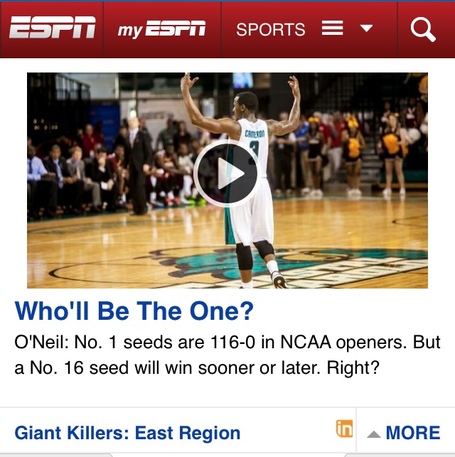 (notice the Chanticleers mascot on the floor) 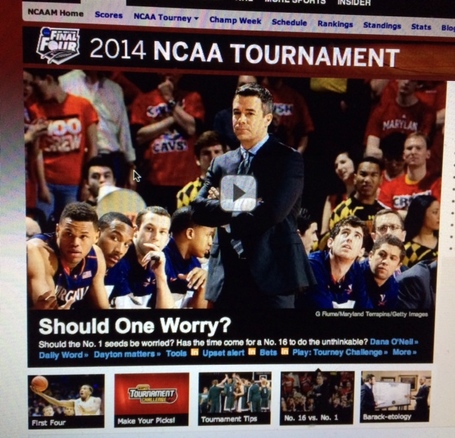 Myron Medcalf just didn't even bother to mention the Hoos as being a possibility to keep Iowa State out of the Final Four in his "10 Bold Predictions", saying:

"It won't be easy to reach Dallas with Michigan State, Connecticut, Villanova and North Carolina potentially standing in their way." -Myron Medcalf, ESPN

There have been some classics from the talking heads on various networks to include mentions of the Cavaliers not having any depth, only playing in close games, and apparently we have a player named 'Big Kirby'. Oh, and Akil has some defensive issues, which is news to me.

"Defensively, Mitchell struggles against ACC players and will find himself in a similar bind against tougher competition."-@DraftExpress

My favorite so far, though, has to be from last night's ESPN recap of the day, showing this as Virginia's portion of the East bracket:

Apparently #UVA had their #1 seed revoked and was replaced by Indiana's 2013 team. Well done @ESPNCBB. pic.twitter.com/0cnYVXIWhM

Yes, that's 2013's Indiana team in our spot, with the LIU/JMU winner in place of Coastal Carolina. Maybe time for some new quality control folks in Bristol?

Now, I definitely don't want this to come off as too sensitive, too rant-y, or too whiny. As I said before, we are potentially paired with a viciously tough Michigan State team that has battled against so many injuries and still managed to put themselves in a great position to make the Final Four.

Several, in fact, have picked Virginia to win it all.

(crd) There's a myth that UVA can't put teams away. Not this year. Slow pace - yes. But they can bury you. Best #BPI since early Jan (ctd)

(ctd) I went back and forth on UVA-Mich St Sweet 16 game for a while... but 'Hoos convinced me... Got UVA getting to Arlington.

While I would be lying if I said I wasn't nervous for tonight, it's reassuring to know that Coach Bennett and this group of guys will be ready to roll, no matter who the opponent.

In reality, I should be thanking those who have picked others over Virginia, or doubted the abilities of this team. They have thrived all season (or, after #TTT at least) knowing that they have been overlooked. Wahoo fans know the caliber of players that Tony Bennett (not Toni Bennett, the stripper from Dick Vitale's story) has brought into this program.

So, try and relax and enjoy the ride. These are your Wahoos.

@JerryRatcliffe Your story about the teams character is evident in this photo Mom meets JoeHarris after ND win #WOW pic.twitter.com/Ft43UYYAwT

We found some other members of the men's bball team hanging out in a staff member's office this morning. Go 'Hoos! pic.twitter.com/qPtvZezjxe

Seriously. @uvasportsphotos is the best in the game. Matt turns a huddle into a masterpiece. #hoos pic.twitter.com/2tuCQk2GFj

Our team in a nutshell 😂 pic.twitter.com/LzHj9SQq3L