Despite three games going chalk, it was a thrilling opening day for the 2014 NCAA Lacrosse Championships.

The first day of the 2014 NCAA Lacrosse championships is in the books, and things went just about as expected. Unless, that is, you're Loyola, in which case you're wondering what in the name of all that is bro-ey just happened. The Greyhounds, seeded third in the tournament, found themselves on the wrong side of a lopsided walloping in a 13-6 loss to Albany. Prior to Saturday's loss, Loyola had not fallen since their February 6 overtime loss to Virginia.

Saturday's win for Albany means that they will be moving on to the quarterfinals for the first time since 2007, which, coincidentally, also resulted in the Great Danes ending Loyola's season. In case you haven't watched any Albany lacrosse yet this year, you may want to watch that film for an absolute clinic on unrelenting offense covered with a solid keeper. With three goals and five assists today, Albany's Lyle Thompson set the NCAA Division I record for most points in a single season at 122. His brother Miles Thompson is sitting in second with 115 points, after contributing five goals and two assists today.

Inside Lacrosse provides the highlights:

Facing Albany in the quarterfinals will be the sixth-seeded Irish, which dispatched an overmatched Harvard 13-5. Notre Dame jumped out to a 7-0 lead midway through the second quarter, and it wasn't much of a game after that. Here's Notre Dame's highlights video and post-game press conference:

North Carolina proved to be no match for the No. 5 Denver Pioneers, who extended their win streak to 12 games with a 9-5 victory over the Tar Heels. Denver found themselves at the half with a 5-1 lead, and though Carolina came out with two quick goals in the first five minutes to trim the lead, the deficit was just too much for the Heels to overcome. Denver awaits the winner of Pennsylvania and Drexel next week.

Rounding out Saturday's action was No. 7 Maryland (booooooo), which used an impressive 7-2 showing in the second half to advance past Cornell in the day's biggest thriller of a matchup. Maryland found themselves down 5-1 at the half, and looking all but defeated for the day. The Terrapins chipped away in the second half, finding themselves down only 6-4 following the third quarter. Finally, Maryland senior attackman Mike Chanenchuk found the back of the net with only two seconds left in the game to give Maryland's first lead of the game - the only one they would need. Maryland advances to face the winner of Syracuse and Bryant.

Plenty more action for Sunday, including the No. 8 Virginia Cavaliers as they host Johns Hopkins at 1:00 p.m. on ESPN 2. Here's what the bracket looks like: 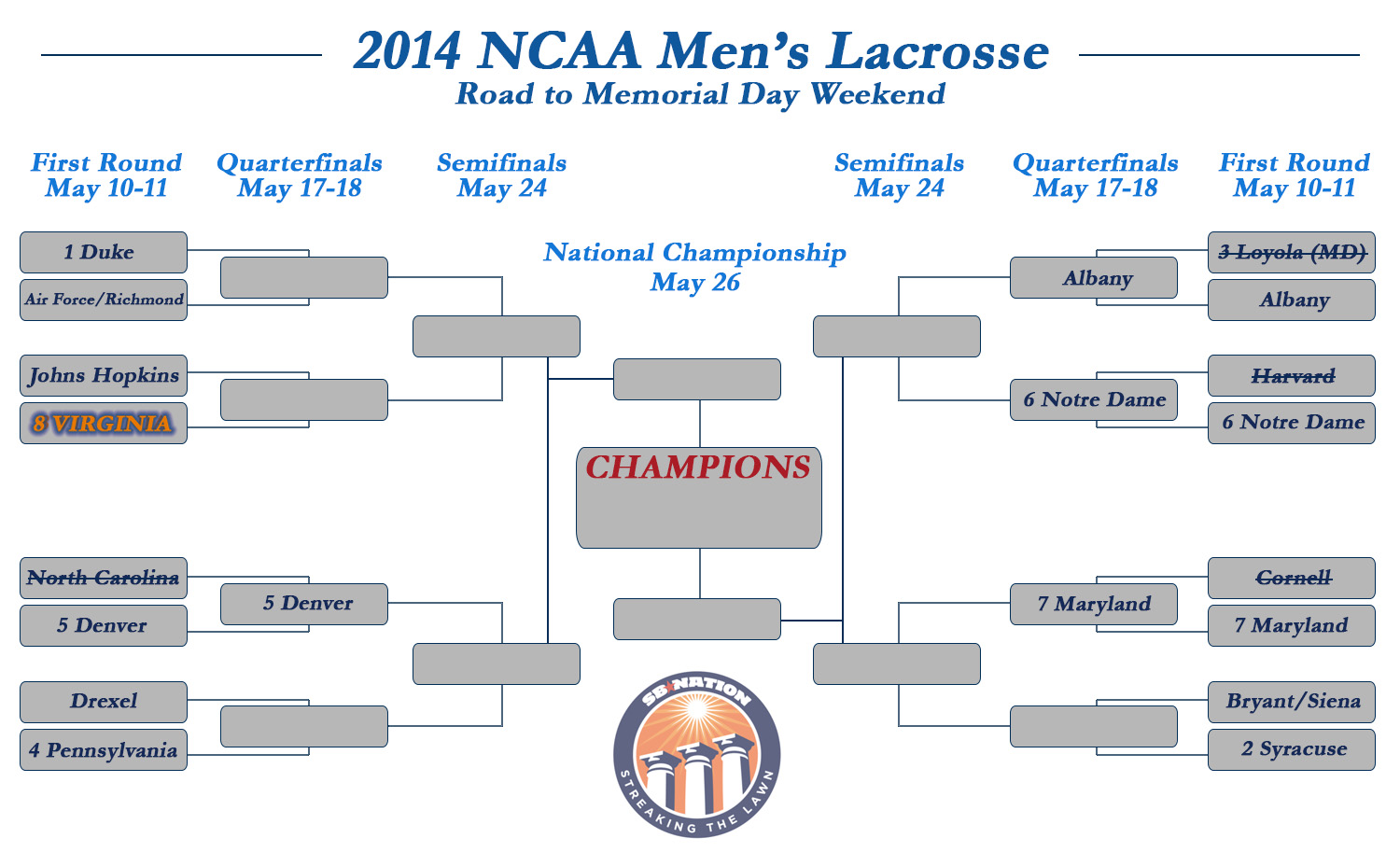