2016 Cavaliers look to be led by defense

Share All sharing options for: Pictures and analysis from Virginia football's spring festival at Scott Stadium

Yesterday we promised more in-depth reflections from the Virginia football spring festival at Scott Stadium. Today we deliver on that promise, and provide some pretty pretty pictures to go with it. 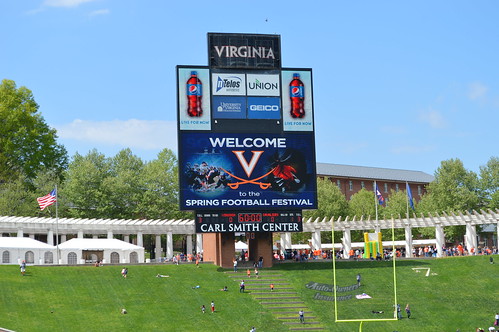 The big headline has been the prospect of a brewing QB controversy. It was difficult to tell from the stands which signal called may have the edge, since no player had uniform numbers. But there were definitely consistency issues no matter who was throwing the ball. And they were throwing A LOT. Even in the practice period designated "Run/Play Action," I only saw two or three snaps from under center. The rest of 11-on-11 action was from the gun, occasionally with 2 RBs or an H-back in the backfield.

The passing game is looking to go deep more often, it appears. Most throws within five yards of the line of scrimmage were swings and flats to running backs. Anyone who lined up on the line of scrimmage was getting downfield. The aerial attack with this year's team looks like it will be using passes as a way to inflict damage, not just a way to move the ball.

The major question left for me after yesterday was, "Is the defense that good, or the offense that bad?" If the offense is average, then this defense could be something special and really drive the team to early success under Coach Mendenhall. They were playing in the backfield and stretching running plays out to the sideline for no gain. Big plays occasionally popped through, but they were far more the exception than the rule.

It felt like at least two linebackers were attacking the line of scrimmage on passing downs every time. (Some of that, no doubt, was because an entire practice period was dedicated to blitz-heavy looks.) There wasn't as much confusion as one might have expected after only 15 practices in an entirely new defense. The corners especially looked very comfortable in their new role.

...Oh boy. For anyone looking for optimism about this fall, special teams practice periods were not a big help. The punting was especially rough, with few kicks getting any combination of air and distance, and SEVERAL taking the shortest lateral path to the sideline (read: "shanks"). The field goal kickers weren't any more impressive, with distance and accuracy both lacking. And for good measure, the punt returners dropped at least two kicks right to them.

Injuries have slowed #TeamKick through the spring, but that unit is definitely the one with the farthest to go before being ready for full-speed action this fall.