ACC Standings Update: Will UVA get an ACC Tournament bye?

With ACC teams largely two-thirds of the way through their conference seasons, let's take a look ahead at UVA's most likely ACC Tournament positioning and tiebreaker scenarios

Share All sharing options for: ACC Standings Update: Will UVA get an ACC Tournament bye?

While Virginia may be living on the NCAA Tournament bubble, things are looking VERY VERY good for an invite to the ACC Tournament! Despite this good fortune, many questions remain: Where will the Hoos be seeded? Who will the team play? Will we get a bye? It's not too early too start to look ahead toward UVA's ACC Championship hopes.

Virginia's history in the tournament is less than stellar, to say the least. The team has just 1 ACC Championship, when Wally Walker led the team from the 6th seed in 1976. (The Sampson years contained three championship game losses). Amazingly, the Hoos haven't advanced to the semifinal round since 1995. This is particularly impressive considering only 9 teams played in the conference until 2005 - thus, with a top-7 finish, only one win would have been required for a semifinal berth in that 9 year stretch. Last season, the Hoos recieved a first-round bye, but fell to NC State 67-64 in its quarterfinal matchup.

With the top four seeds getting byes to the quarterfinal round, the Hoos are in decent shape, though the team's upcoming schedule means that it is far from a lock. Here are the current ACC standings and a rough look at teams' remaining schedules, with "tiers" broken up as such (according to our power rankings):

ACC Standings and Remaining Games (Home vs. Away and by "Tier")

The first seeding tie-breaker is head-to-head record (this is why FSU is in front of Maryland, and NC State over UNC). If the teams split their season series, the second tie-breaker is record against the top-seeded team. If this is a tie, it is record against the second seed, etc. Ties between more than two teams are broken by best conference record in games between the other tied teams.

Before looking in UVA's rear-view mirror, we can see that Duke is just a game in front of UVA, with a game between the teams still to come in Charlottesville. Though the Blue Devils have three games left against the league's bottom feeders, they also travel to UNC and host Miami. If Virginia finishes 12-6 with a win over Duke, and Duke drops games to Miami and at UNC too, the Hoos will be the second seed (unless UNC wins out). Stranger things have happened.

Virginia's main competition for a first-round bye comes from NC State and UNC. Fortunately, UVA has an effective two game lead on the Wolfpack by virtue of their head-to-head win. NC State doesn't have the world's most difficult remaining schedule, but games at UNC, FSU, and Georgia Tech will challenge a recently struggling Wolfpack squad.

The Tar Heels split their series with the Hoos; moving to the second tiebreaker, the Heels lost to Miami and Duke, but still have another home shot against the Blue Devils. UVA would clinch a tiebreaker over UNC with a win over either of those teams in the coming weeks. Alternatively, if both teams finish winless against the top two, UVA owns the tiebreaker if NC State is next in line.

Virginia has clinched the tiebreaker in the event of a three-way tie with NC State and UNC.

UVA has already defeated Maryland and Florida State, and will have another shot at each to put more distance between themselves and claim a head-to-head tiebreaker.

At this point in the season, a top-four finish and first-round bye looks to be the most likely scenario if the Hoos play to their potential during the remainder of the season. Though UVA's schedule is foreboding, the team is in good shape in terms of potential tie-breaker scenarios (one of the few benefits of losing games to teams at the bottom of the ACC).

If UVA finishes 3rd or 4th in the conference, the team's most likely quarterfinal opponents (assuming chalk in the play-in games) are UNC, NC State, and Maryland. (If UVA slipped lower, it would likely have to play-in against BC or VT). Ken Pomeroy projects a 12-6 third-place finish and matchup against the Maryland-BC first-round winner.

Below is a look at the ACC Tournament bracket picture if the postseason began today. (In reality, the tourney will take place from Thursday, March 14th through Sunday the 17th in Greensboro, NC). 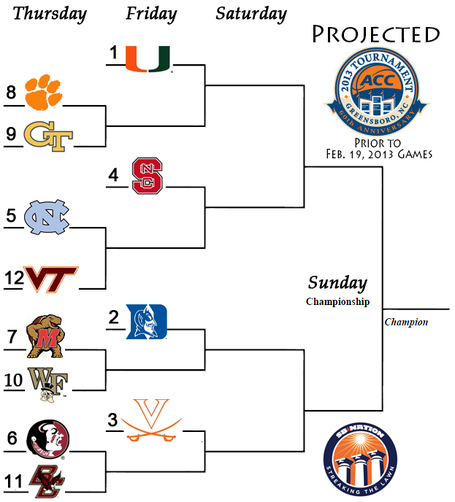