We've taken a look at the Hoos' RPI in the past, but in part two of this post, we'll investigate exactly how likely UVA's NCAA hopes are.

At 5-3 in the ACC and 15-6 on the season, Virginia may be staring a second straight NCAA Tournament bid in the eye if it weren't for an unbecoming RPI. In Part I of this post, my Streaking the Lawn colleague Wahoometrics explained that the Selection Committee's actions have followed a very predictable pattern based on teams' final RPIs. In fact, if you haven't read that post,

Now that you are caught up and understand Virginia's bizarre situation, we could project the likelihood that the Hoos are dancing in March in a (less-footnoted) summary.

So you have it handy, here are the guidelines for Virginia's tournament chances based on past selection procedure. 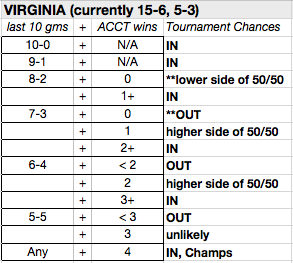 Forecasted finishes are based on RPIForecast.com's simulations, which use Sagarin's "Predictor" model. Sagarin has the Hoos at 42nd in the nation - this falls in line with other predictive computers, (UVA is 41st in KenPom, for example). So, here is a look at our projected regular season finish. 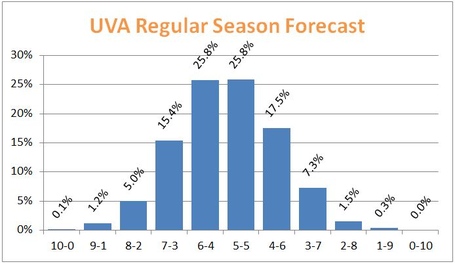 When you add in the ACC Tournament and combine it with the earlier table of Committee history, we get the following: 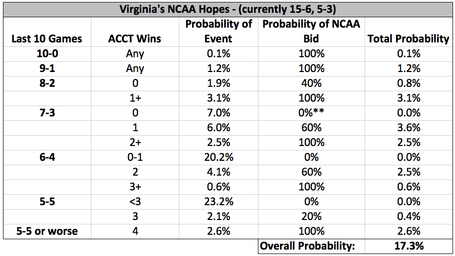 The bottom line? Virginia's chances of being a part of March Madness stand at about 1 in 5.

There are two potential reasons why one would believe that this probability has caveats.

1) You think that UVA is a better or worse team than forecasted.

2) You think that UVA's chances of selection (given a particular finish to the season) are higher or lower than those outlined in the prior post.

In case 1, one may argue that the development of the team's first-years and its early-season point guard struggles dictate that the Hoos will finish better than computers expect. On the other hand, it is possible that KenPom and Sagarin are overrating Virginia, as has been argued in the past about other low-possession teams.

In case 2, one would say that Virginia is a special case as far as selection goes. The much-maligned RPI is typically at least a decent proxy for a team's performance; however, this year there will likely be a significant gap between UVA's perceived results and its RPI. Thus, it is possible that the Committee will make an exception to its past procedure. This is especially true in the cases that Wahoometrics singled out in his previous post - I can't imagine Virginia finishing 13-3 or even 12-6 in the ACC and being left out of the tournament either. The uproar would be loud (and justified).

However, the only data that we can go on is the past behavior of the Selection Committee, and it's behavior has been remarkably consistent. If the Hoos finish the year 12-6 (with no ACCT wins) and make the tournament, the Committee will have made a drastic shift from its norm. Don't forget that there are other factors working against UVA, such as the group's emphasis on non-conference SOS (UVA's is 330th in the nation). Feel free to make an upward adjustment in your head to take into account the possibility of an exception (I probably will too)...but understand that this will be just that - an exception.

Based on what we know about the Hoos and what it has required to qualify for an NCAA Tournament spot in the past, the current probability of an NCAA bid stands at about 15-20%.