One step at a time

The college students on the Virginia Cavaliers basketball team live in the same world the rest of us do. (In other words, they have Twitter accounts). When Syracuse fell, and we all celebrated, the team continued to emphasize a rallying cry that's cliche throughout sports: "One game at a time."

Still underdogs in our book... And we are focused on Notre Dame and nothing else 🏀 #Wahoowa

Norte Dame Saturday!!! Be There!!!

Forget all that, we have to get these W's fellas!!!!

It's a maxim that's far easier shouted than it is abided by. The results of this week are a great demonstration why. There's no question that UVA is the better team than Virginia Tech. Yet, for 35 minutes this week, the Hokies played the Hoos toe-to-toe. Boston College hasn't beaten a D-I team other than VT since November, but went into the Carrier Dome and took down the #1 ranked team in the nation on their home court. Even Florida, a candidate to take over that #1 spot, required some luck to beat Auburn in Gainesville.

There's plenty of explanations to assign to these results: Parity in college basketball, exceptional preparation from the underdogs, and just plain old bad (/good) luck. But it's undeniable that the best teams in the nation have targets on their backs; the Hokies and Eagles of the world have games against ranked teams circled on their calendar, just like we would in previous years. Matching that level of intensity night after night is a new challenge for this team.

Tony Bennett, unsurprisingly, is acutely aware of the issue. Joe Harris told the Daily Progress, "Coach talked the other day about how we're working our way up some stairs and we have to have two feet on each stair before we get to the next one." Whatever works!

While Virginia has continued to take care of business, the Wahoo defense hasn't looked quite as sharp lately, especially early in games. UVA has held opposing ACC teams to .90 PPP overall thus far, but allowed their last 4 opponents to score more than 1 PPP during the first halves. That includes Virginia Tech, the worst offense in the conference, and Clemson, the 3rd-worst (the Tigers would actually finish at a strong 1.09 PPP mark). The team's return to JPJ this weekend for a rematch with Notre Dame would be a nice time to get things going again.

By any measure, Notre Dame has been a disappointment this season. After a 10-4 start, including a win over Duke in the conference-opener, they've gone 4-9 down the stretch, beating BC twice, and Virginia Tech and Clemson at home. The loss of Jerian Grant has hurt them badly; while defense is ND's main issue, I think they counted on a dominant offense to keep them in shootouts. In the teams' first matchup, the Hoos absolutely dominated the Irish. A late Notre Dame run made the score look closer than it was, but Virginia almost toyed with the the Irish on both sides of the ball, highlighted by some beautiful passes from London Perrantes. Mike Tobey had his best game of the year, shooting 7-10 from the field.

Offensively, Notre Dame's biggest struggle has been getting to the FT line, where they rank last in the ACC and 345th in the nation. And on defense, they allow teams to shoot a high percentage and rarely force turnovers, which is a bad combo. Their "free-throw defense" is ranked 349th out of 351 teams in D-1 (75.9%), so maybe the team will take that opportunity to make some free-throws?

KenPom gives UVA a 92% chance at beating Notre Dame, followed by a 91% chance of taking down Miami on Wednesday (so about an 84% chance of remaining unscathed headed into the Syracuse game).

While the ones who actually play basketball focus on Notre Dame, Wahoo fans can look ahead at what's to come. (Remember, we don't actually influence what happens on the court, no matter how much we and our lucky underwear would like to think so).

With Syracuse's loss, Virginia becomes a decent-sized favorite to win the conference. TeamRankings.com gives UVA a 72% chance at grabbing the #1 seed in the ACC Tournament. That's because Cuse's loss opens up some new paths toward a conference title (for example, if the Hoos beat Syracuse and faltered at Maryland, or even if UVA lost to the Orange but Syracuse lost at Duke and Maryland, Virginia could take the top seed). 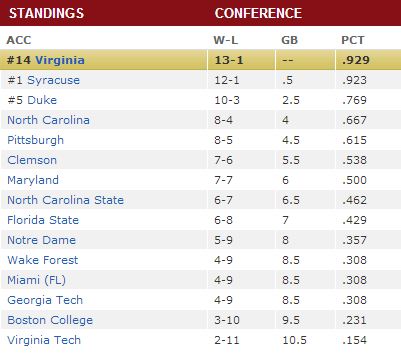