Virginia vs. Syracuse Preview: The Game of the Century

Share All sharing options for: Virginia vs. Syracuse Preview: The Game of the Century

Confession: This is not the first matchup I've termed "The Game of the Century" - and with postseason play nearing, it's pretty likely it won't be the last. But...can you imagine a bigger game in Charlottesville?

Let's take a look at the ACC standings: 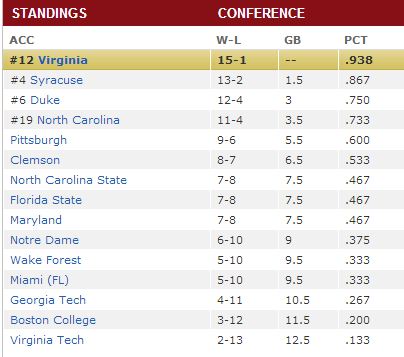 A win will clinch an outright ACC regular season title for Virginia. The last time UVA finished first was 2007, but the Hoos haven't been alone in first place nor been the ACC tournament 1 seed since their sole outright title in 1981.

Obviously, there's a pretty difficult opponent standing in Virginia's way. #4 Syracuse won their first 25 games before losing a home shocker against Boston College. They then fell on the road to Duke, before recovering to slip by Maryland.

It will also be senior night at JPJ. Four years ago, Joe Harris and Akil Mitchell committed to Tony Bennett as part of a 6-man class, hoping to turn the Virginia basketball program around. Now, they play their final home game at John Paul Jones Arena with a chance to clinch 1st in the ACC. Win or lose, they succeeded. Thanks to Joe, Akil, and Thomas Rogers for all their hard work and dedication - it's been an amazing 4 years.

The game tips off at 4 PM Saturday, and it will be broadcast on ESPN. Dick Vitale will have the call, as he makes his first visit to Charlottesville since 2002. It's been a special year, and the table is set to put quite the exclamation point on the conference season. Here's what stands in UVA's way:

Usually, we think offenses are good when they are successful shooting the ball into the basket. That's basketball, right? Well, Syracuse has a very good offense, but they aren't particularly good at shooting. They make up for it by succeeding in other aspects of the game: They take care of the ball, and they rebound their own misses.

During ACC play, Syracuse is 12th in eFG% (behind GT!), making 45% of their 2s and 33% of their 3s. However, they are second in both offensive rebounding and turnover rate.

The combination of poor shooting and low tempo (345th in adj. tempo) has given rise to a misguided "Syracuse is bad at offense" media talking point that simply isn't true, looking at the season as a whole.

Luckily, UVA is one of the nation's best teams on the defensive boards, allowing opponents to grab just 26% of their misses during ACC play. Rakeem Christmas and Jeremi Grant will be Syracuse's main factors on the offensive boards, but Baye Keita is actually the team's best offensive rebounder (in more limited minutes). We know Akil Mitchell is a rebounding machine that could match-up well down low with Cuse's big men. It will be up to more...inconsistent rebounders, like Mike Tobey and Anthony Gill to hold their own.

Of course, it is possible that Cuse could score without needing a second chance. CJ Fair is by far the Orange's highest volume shooter, using over 26% of possessions, but it's freshman Tyler Ennis that keeps the offense flowing. When Ennis is on the court, he picks up as assist on 33% of made field goals, and is a threat to shoot or get to the FT line. Tyler Cooney is the main guy to watch from behind the arc - he's a 40% 3-point shooter, and has attempted far more three-pointers than the rest of his team combined. After a 9 for 12 long range explosion against Notre Dame, Cooney has cooled off, missing 16 of his last 19 attempts.

As we all know, Jim Boeheim runs a 2-3 zone. It's nice that the Hoos have had a few attempts to dissect some zone looks against VT, Notre Dame, and Miami. But it's not really anything like what UVA will face against Syracuse.

For one, the Orange defense is predicated on forcing turnovers, and it's 11th in the nation in that stat. They do an okay, but not great, job limiting opponents' FG percentages...the Orange just make it so hard to actually shoot, as they get in the way and snatch the ball away first (reflected in their top-5 national rankings in both steals and blocks). It's going to be a pain.

1) Hit three-pointers without "falling in love" with the shot. The Hoos seemed a bit three-point happy and non-aggressive in the first half against VT and it cost them. Launching threes against Syracuse is a thing everyone wants to do (Cuse is 2nd in the nation in % of points allowed from behind the arc), but the high volume has generally led to a lower degree of success. Joe Harris should take every three has has open, but the team can't end up settling.

2) Use Anthony Gill as a zone-buster in the high post. Gill is 9 for 14 from the field (and has attempted 16 FTs) in his past 3 games against mainly-zone teams, as opponents have struggled to find an answer for his aggression. Malcolm Brogdon can serve as a suitable option to get to the rim as well, and Mike Tobey has the skill and size to match-up down low. But Anthony Gill is as close as it gets to a favorable matchup.

3) Eliminate careless turnovers. Syracuse is already very good at forcing TOs, and they will inevitably do so against Virginia. UVA can't afford to help them out. The Hoos have went through a few careless stretches, recently against Notre Dame and Virginia Tech, and have to just keep those as close to zero as possible.

My glasses are too orange and too blue to give a prediction credible enough to report here. Here are the thoughts of some more objective systems out there -