What stands in UVA's way to an ACC title?

Virginia's 25-6 (16-2) regular season is over. It's postseason time! This year's ACC Championship, while will take place once again in Greensboro, features a new setup because of the additions of Syracuse, Pitt, and Notre Dame. The event will start on Wednesday, with three games to trim the field to 12. Then, the traditional setup continues, with the top 4 seeds (Virginia, Syracuse, Duke, and UNC) receiving byes through to the quarterfinals on Friday. UVA is the #1 seed and will play the winner of #8 Maryland vs. #9 Florida State. The Terps and the Seminoles square off Thursday at noon, with the victory taking on the Hoos Friday at noon. 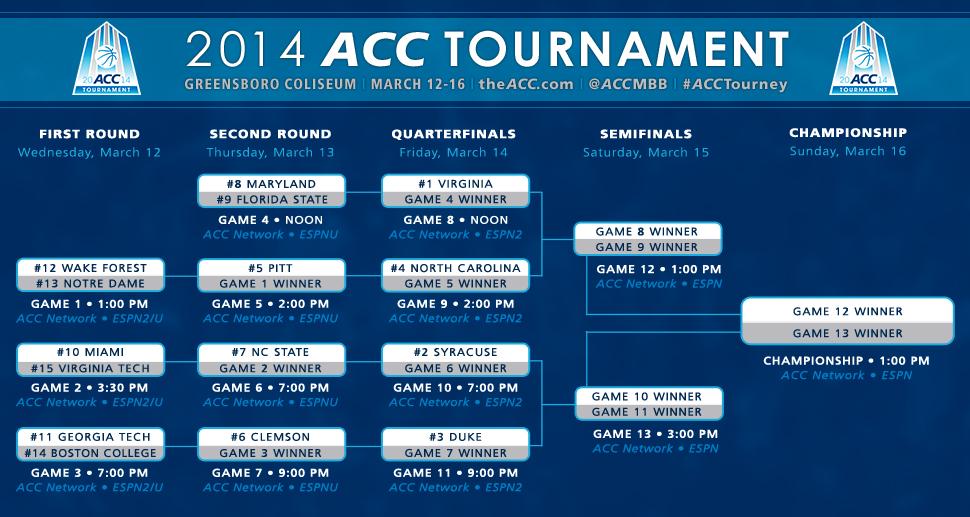 Historically, the ACC tournament has been a house of horrors for Virginia. UVA has one title, when Wally Walker led the Hoos to an upset win as the #6 seed in 1976. Since then, there hasn't been much to celebrate. Even Ralph Sampson failed to bring his teams titles, as Michael Jordan's UNC teams and Jimmy V's NC State squad stood in the way. UVA last reached the semifinals in 1995. In the 18 years since, Virginia has not lived to play on Saturday. That's simply mind-boggling; there have been some solid Wahoo teams over the past 2 decades, and a semi-final berth didn't require any more than a win or two.

Is this year the year? TeamRankings.com gives UVA a 74% chance of advancing to the semis, a 39% shot at making the finals, and a 21% chance at winning it all. The Maryland-FSU game is close to a coin-flip. KenPom has Florida State at a 52% favorite. The teams split their regular season matchups, with the home side winning by double digits each time.

Neither FSU nor Maryland is a pushover, but I have to imagine most Wahoo fans would prefer to see Florida State. Maryland played the Hoos tough twice this year, obviously winning in College Park, while Virginia dominated both matchups with the Seminoles. To pre-empt the inevitable "it's hard to beat a team three times in a season" cliche; that's a truism because of simple probability, but a misleading one. The third win is no harder than the first or second win; if anything, the prior experience should be used as a good predictor of what to expect.

If UVA gets past the FSU/UMD winner and reaches the semi-finals, #4 North Carolina would be the opponent if chalk prevails (Pittsburgh, as well as Wake Forest/Notre Dame are the other potentials). The Hoos cannot play Syracuse nor Duke until the finals.