Because sometimes, you just can't wait half an hour for completed brackets to come out

Sometimes, it's just too much to have to actually sit and wait for the overlords that be to come out with pre-printed March Madness brackets after the NCAA Selection Committee. So for those of you who like to furiously write down teams as they're announced, we and SB Nation have you covered right here. 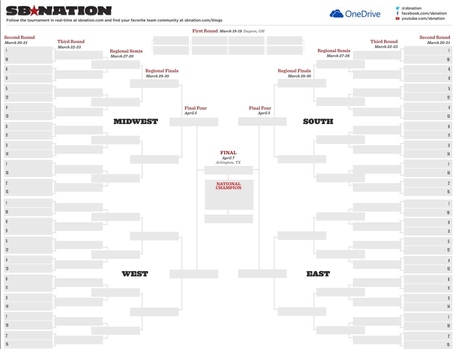 We already know that Florida, Wichita State, and Arizona are locks for the No. 1 seed. The way Louisville has been playing, they look unstoppable for the last top seed. But Michigan, Duke, and our Virginia have something to say about that. The tournament starts Tuesday with a pair of play-in games in Dayton, Ohio. Two more play-ins on Wednesday will set the field of 64, setting the stage for the best four days of the year.

The NCAA tournament field will be announced on the Selection Show, which starts Sunday, March 16 at 6 p.m. ET.

Keep it on Streaking The Lawn to find out where the Wahoos land and how the bracket's looking.