The ACC released this year's 2013 football schedules today - who will UVA take on this season?

After an off-season rife with changes, the Virginia Cavaliers' 2013 schedule has finally been released. In his fourth season, Mike London will play 8 home games highlighted by out-of-conference dates with Oregon and BYU and a regular season finale against Virginia Tech.

UVA will face two opponents that finished in last season's final AP Top 25, Oregon (#2) and Clemson (#11), as well as eight teams that played in bowl games last season. (This doesn't include likely dates against ranked opponents in the ACC Championship Game and Orange Bowl. Get your tickets now).

Without further ado, here's your 2013 schedule: 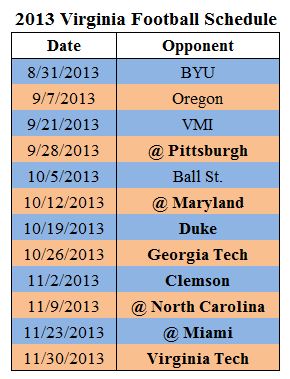 The Hoos open the season with BYU at Scott Stadium on August 31st. The schools will meet for the fourth time, the most recent a 38-35 Brigham Young victory at Scott Stadium in 2000. Next year, UVA will return a trip to Provo, Utah.

Oregon visits the following week; the Ducks replaced a game at Penn State on the 2013 calendar, leading to an unprecedented 8th home game for Virginia.

UVA will finish its out-of-conference schedule against VMI and Ball State, with the conference opener against Pittsburgh sandwiched in between.

This season includes two bye weeks; the first gives the Hoos two weeks to catch their breaths after facing Oregon's high powered offense, while the second is a break before season-ending games at Miami and vs. VT.

UVA finishes the season with its annual Thanksgiving weekend rivalry matchup against the Hokies. It has been a while since we won one of these. Please, let's take advantage of this opportunity at home. Despite swirling rumors that this game would take place on Black Friday, the ACC mercifully left this series on the Saturday after Thanksgiving.

Relative to its ACC Coastal brethren, UVA plays a rigorous conference schedule. Its two Atlantic Division matchups include a home game against Clemson, a heavy early favorite to win the league, in addition to the yearly game at Maryland.

A quick take from the schedule is the sharp increase in difficulty from October to November. Mid-season home games with VMI, Ball State, Duke and Georgia Tech, with road games at Pitt and Maryland all look to be quite winnable. The closing four games vs. Clemson, at UNC, at Miami, and against Virginia Tech are tougher tasks.
UVA will begin practicing on March 18th, and the yearly Orange-Blue game will be on April 6th.