2013 NCAA Vegas Odds: Are you betting on the Hoos?

Share All sharing options for: 2013 NCAA Vegas Odds: Are you betting on the Hoos?

With football season coming up on two months away, it's time to start looking forward to how this year will play out for the Hoos. And if you are going to think about the football season, it's natural to make predictions. But if you're going to make predictions, you've gotta put your money where your mouth is! And if you're going to do that, you'll probably want to look at what Vegas expects from UVA (and the rest of the ACC) this season.

So, in a word, expectations are....low. Vegas sets the team's over-under at 4.5 wins. This is tied with Syracuse for 2nd worst in the conference (BC is last - their over-under is at 4.5 also, but gamblers get odds for picking the over).

Though these numbers aren't exactly encouraging, it doesn't necessarily mean that Vegas expects UVA to be one of the worst two or three teams in the conference. It is also a reflection of the program's difficult schedule - CBSSports rates the slate as one of the top 10 hardest in the nation.

So will we surpass Vegas's target? As a reminder, here's our schedule: 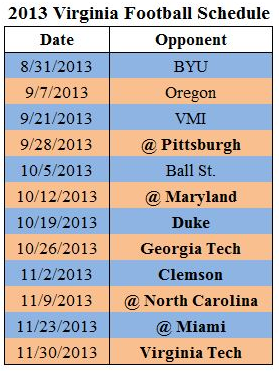 The out-of-conference is imposing. We can write in a win over VMI and a loss against Oregon. A second OOC victory over BYU or Ball State is more likely than two losses, but not a given.

If UVA escapes that section of the schedule with two wins, a 3-5 ACC record would be enough to hit the "over." With a home game against Duke and a trip to College Park on the docket, that seems to be a reasonable target.

If I were a betting man, and I am, I'd take the over on UVA wins this season. I am also an optimistic man. Where would you put your money this year?

As a warning, bets on Virginia football were about as unsuccessful as can be last year. The 2012 Hoos were 2-8-2 against the spread...good for last in all of college football, per VegasInsider.

Odds for the ACC are below...or you can see more from around the NCAA here (all odds courtesy of 5dimes.com).